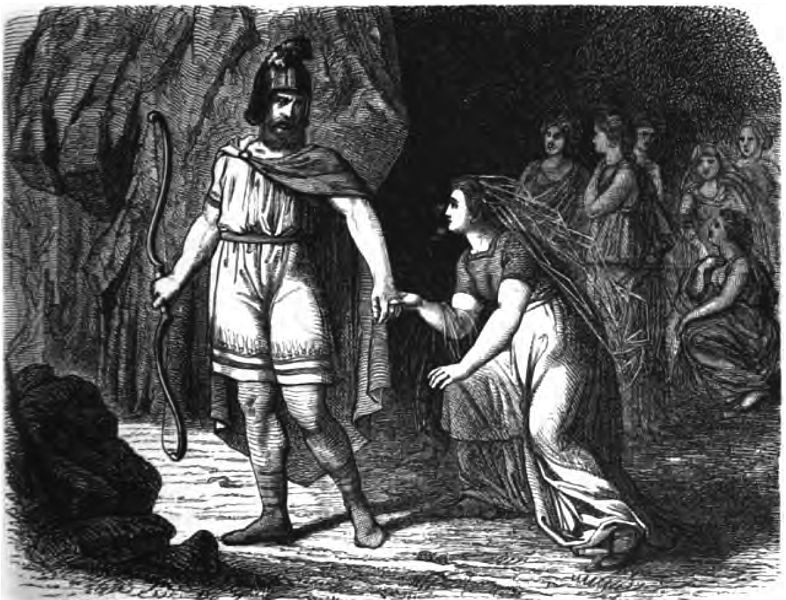 In Norse mythology, Óðr (Old Norse for “mad, frantic, furious, vehement, eager”, as a noun “mind, feeling” and also “song, poetry”; Orchard (1997) gives “the frenzied one”) or Óð, sometimes angliziced as Odr or Od, is a figure associated with the major goddess Freyja. The Prose Edda and Heimskringla, written in the 13th century by Snorri Sturluson, both describe Óðr as Freyja’s husband and father of her daughter Hnoss. Heimskringla adds that the couple produced another daughter, Gersemi. A number of theories have been proposed about Óðr, generally that he is somehow a hypostasis of the deity Odin due to their similarities.

The Old Norse noun óðr may be the origin of the theonym Óðinn (Anglicized as Odin), and it means “mind”, “soul” or “spirit”. In addition, óðr can also mean “song”, “poetry” and “inspiration”, and it has connotations of “possession”. It is derived from a Proto-Germanic *wōð- or *wōþ- and it is related to Gothic wôds (“raging”, “possessed”), Old High German wuot (“fury” “rage, to be insane”) and the Anglo-Saxon words wód (“fury”, “rabies”) and wóð (“song”, “cry”, “voice”, “poetry”, “eloquence”). Old Norse derivations include œði “strong excitation, possession.”

Ultimately these Germanic words are derived from the Proto-Indo-European word *wāt-, which meant “to blow (on), to fan (flames)”, fig. “to inspire”. The same root also appears in Latin vātēs (“seer”, “singer”), which is considered to be a Celtic loanword, compare to Irish fāith (“poet”, but originally “excited”, “inspired”). The root has also been said to appear in Sanskrit vāt- “to fan”.

Óðr is mentioned in stanza 25 of the Poetic Edda poem Völuspá. The name appears in a kenning for the major goddess Freyja; “Óð’s girl” (Old Norse Óðs mey gefna), pointing to a relation with the goddess.
Stanza 47 of the poem Hyndluljóð contains mention of a figure by the name of Œdi. There, Hyndla taunts Freyja, stating that Freyja had run to Œdi, “always full of desire”. Scholar Carolyne Larrington says that the identity of Œdi is uncertain; it has been theorized that this may simply be Óðr, or that the figure may be another lover of Freyja’s. Scholar John Lindow describes this reference as “puzzling” as no other information is provided regarding the situation referred to by Hyndla. Scholar Britt-Mari Näsström says that this reference likely does not refer to Óðr, rather being the product of the amendments of Sophus Bugge, and that the line simply points to Freyja’s lust. Näsström comments that “perhaps the philologists of the nineteenth century were misled by their romantic intentions”.

In chapter 35 of the Prose Edda book Gylfaginning, the enthroned figure of High says that the goddess Freyja “was married to someone named” Óðr. High details that the two produced a daughter, Hnoss, and that this daughter was so fair that the term hnossir (meaning “treasures”) derives from her name and is applied to whatever is “beautiful and precious.” High adds that Óðr would go off traveling for extended periods, all the while Freyja would stay behind weeping tears of red gold. However, Freyja would travel “among strange peoples” while looking for Óðr, and so had many names. In chapter 36 of Gylfaginning, the stanza of Völuspá mentioning Óðr is quoted.

In chapter 20 of the Prose Edda book Skáldskaparmál, poetic names for the goddess Freyja are listed, including “wife of Óðr”. In chapter 36, a prose narrative points out than an excerpt of a work by the skald Einarr Skúlason refers to Freyja as the wife of Óðr (“Óðr’s bedfellow”). The same excerpt appears in chapter 49. In chapter 75, Óðr is mentioned a final time in the Prose Edda, where Freyja is cited as having “wept gold” for Óðr.

In chapter 1 of the Heimskringla book Ynglinga saga, Snorri Sturluson refers to the two in an euhemerized account, stating that Freyja had a husband named Óðr, two daughters named Hnoss and Gersemi, and that they were so beautiful that their names were used for “our most precious possessions” (both of their names literally mean “jewel”).

Óðr is often theorized as somehow connected to Odin (Old Norse: Óðinn), the head of the Æsir in Norse mythology, by way of etymological similarities between the two (Lindow states that the linguistic relationship is identical to that of Ullr and Ullin—often considered as variant names of a single god), and the fact that both are described as going on long journeys, though Lindow points out that Snorri is careful to keep them apart.

Scholar Viktor Rydberg proposed that Freyja’s husband Oðr is identical with the hero Svipdag from the poems Grougaldr and Fjolsvinsmal. Jacob Grimm and others have long identified Menglad, “the neck-lace lover”, Svipdag’s love interest in that poem, with Freyja.

Scholar Hilda Ellis Davidson proposes that a cult of the Vanir may have influenced a cult of the Æsir in the waning days of Norse paganism during the Christianization of Scandinavia, potentially resulting in the figure of Óðr in Norse mythology, which she refers to as a “strange double of Odin”.

Scholar Rudolf Simek says that since Óðr appears in a kenning employed by the 11th century skald Einarr Skúlason (in Skáldskaparmál) and in the Poetic Edda poems Völuspá and Hyndluljóð, Óðr is not a late invention. Simek says that “the most obvious explanation is to identify Óðr with Odin,” noting the similarity between their names (and agreeing with the Ullr/Ullin parallel), the long absences (comparing them to Odin’s exile in Gesta Danorum), and Óðr’s marriage with Freyja.

Simek adds that although these similarities exist, there are things that speak against it, such as that “Freyja’s tears for Odin and her search are unmotivated,” and that “the reference to Hnoss as their only child is surprising – why, for example, should Baldr not be mentioned?” Simek notes that these issues have resulted in sometimes very different explanations; Sophus Bugge and Hjalmar Falk saw a reflection of the Greek god Adonis in Óðr, Rudolf Much saw a reflection in the god Attis, and Lee Hollander theorizes a reflection of the folktale of Amor and Psyche in Snorri’s Prose Edda account of Óðr and Freyja.

Simek concurs that, if the two gods were identical, Snorri would not have kept them so apart; yet that the names Odin and Óðr are so close that a lack of connection between the two gods isn’t possible. Some scholars have examined the relationship between the two in an attempt to find “older” and “younger” layers in the figures of Óðr and Odin, but Simek says that this approach has yet to yield any results that are convincing due to the sparsity of sources that mention Óðr.

Scholar Stephan Grundy comments that while it is conceivable that Óðr may have been invented as a separate figure from Odin after Christianization, the notion is implausible because a separate, independent figure by the name of Wod survives in folklore involving the Wild Hunt in areas as far south from Scandinavia as Switzerland. Grundy notes that Óðr appears to date to at least before the Viking Age. Grundy opines that “as pointed out by Jan de Vries and others, there is little doubt” that Óðr and Odin were once the same figure. Grundy says that Óðinn is an adjectival form of Óðr, and that Óðr may be the elder form of the two.

Grundy theorizes that the goddesses Frigg and Freyja did not stem from a single goddess. If they did not, Grundy says, the question of explaining the relationship between Freyja and Óðr becomes central, which has been one of the strongest points made in favor of the descent of Frigg and Freyja from a common goddess. Grundy notes that it is rarely mentioned that the Germanic peoples sometimes practiced polygamy, and cites chapter 18 of Tacitus’ 1st century AD work Germania, where Tacitus records that while monogamy has very few exceptions in Germanic society, there are those who actively seek a polygamous marriage “for the sake of high birth.” Grundy contrasts this with accounts of polygynous marriages among the Merovingians and Carolingians, points out that the only Germanic law-code that expressly forbids such relationships is that of the Visigoths, and notes that while polygynous marriages are rarely attested in Scandinavian sources, Harald I of Norway was married to seven wives simultaneously. Grundy concludes that, as “gods tend to reflect the social norms of their worshippers,” it very possible that Odin/Óðr originally “could have rejoiced in Frigg and Freyja simultaneously”. Grundy posits that, over time polygynous marriages dwindled during the Viking Age and into the Christianization of the North Germanic territories and, as a result, such a relationship was less easily reflected in the deities of the people.

The Blot
Hammer Rite
Gothi takes the hammer and goes to one side of the ritual space and says:

We ask the gods to hallow this place as we prepare to celebrate the blessings of Óðr.

Gythija takes the hammer and goes to the opposite side of the ritual space and says:
We ask the gods to protect those who have joined us to celebrate our kinship with Óðr.

the flame that fans rage,

we thank you for the lessons you give us.

He who inspires us,

He who Freyja wept tears of gold for,

we ask that you celebrate with us today.

Then sought the gods | their assembly-seats,

The holy ones, | and council held,

To find who with venom | the air had filled,

Or had given Oth’s bride | to the giants’ brood.

In swelling rage | then rose up Thor,–

Seldom he sits | when he such things hears,–

And the oaths were broken, | the words and bonds,

The mighty pledges | between them made.

I know of the horn | of Heimdall, hidden

Under the high-reaching | holy tree;

On it there pours | from Valfather’s pledge

A mighty stream: | would you know yet more?

“Hence shalt thou fare, | for fain would I sleep,

From me thou gettest | few favors good;

My noble one, out | in the night thou leapest

As. Heithrun goes | the goats among.

“To Oth didst thou run, | who loved thee ever,

And many under | thy apron have crawled;

My noble one, out | in the night thou leapest,

As Heithrun goes | the goats among.”

“Around the giantess | flames shall I raise,

So that forth unburned | thou mayst not fare.”

“Flames I see burning, | the earth is on fire,

And each for his life | the price must lose;

Bring then to Ottar | the draught of beer,

Of venom full | for an evil fate.”

Though, giantess, bitter | thy baleful threats;

This entry was posted in Blots, Rituals. Bookmark the permalink.