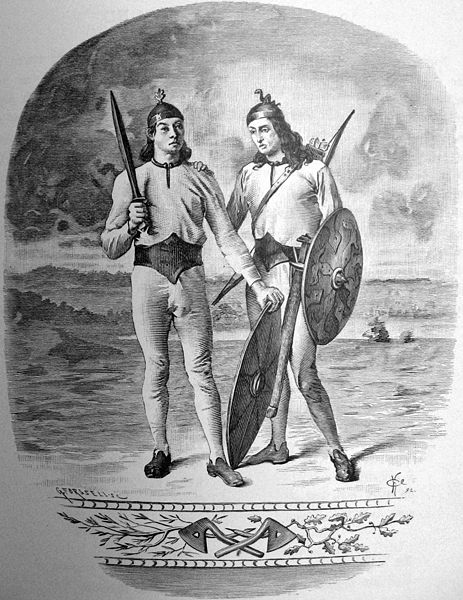 Vidarr is typically referred to as the god of Vengance in the norse.  He is the son of Odin who, in the poetic edda, kills the wolf fenrir in vengance for his father’s death.   He ends up surviving the conflict ragnarok afterwards.   Vidarr is considered one of the strongest gods in the norse pantheon (almost as strong as Thor) and considered to be “the silent one.”    He’s also referred to as “the one with the thick shoe.”

Vidarr’s silence may be directly related to him being the god of vengance.   There is a tradition of  silence or abstention with respect to acts of vengance through both norse literature (Vali does not wash his hands or comb his hair until Balder’s adversary is brought to the funeral pyre.)  Tacitus, in his work Germania, also describes a Germanic tribe where a man may not groom or shave before he has slain his first enemy.

Vidarr is the god one calls upon in times of great difficulty.  He’s the one you can rely upon to help when times are  difficult.  He’s also the god whom all the others trust,

Gothi takes the hammer and goes to one side of the ritual space and says:

“We ask the gods to hallow this place as we prepare to celebrate the blessings of the silent one.”

Gythija takes the hammer and goes to the opposite side of the ritual space and says:

“We ask the gods to protect those who have joined us to celebrate Vidarr.”

You who are nearly as strong as Thor,

and as watchful as Heimdall,

With the thick soled shoe,

We gather here today to honor you,

and to honor that which you stand for.

Slayer of the Fenris,

one who lives beyond Ragnarok,

We raise our horn to you to honor the actions you have taken,

and understand what it means to earn trust.

Vithar, to fight | with the foaming wolf;

In the giant’s son | does he thrust his sword

Full to the heart: | his father is avenged.

All remain silent in contemplation of the implications of vengance.

“O Vidar,” he said, “strangest of all my sons; God whowill live when all of us have passed away; God who will bring the memory of the Dwellers of Asgard into a world that will know not their power; O Vidar, well do I know why there grazes near by thee the horse ever ready for the speedy journey: it is that thou mayst spring upon it and ride unchecked, a son speeding to avenge his father.  We thank you for your presence today.

Gothi pours some of the mead from the horn into the earth.

“To you only, O Vidar the Silent One, do we  speak of the secrets of our doings. Who but you can know why  Odin hung on the tree Ygdrassil nine days and nine nights? You who learn all the secrets of Odin, to bring them to the next world.  We thank you for joining us.