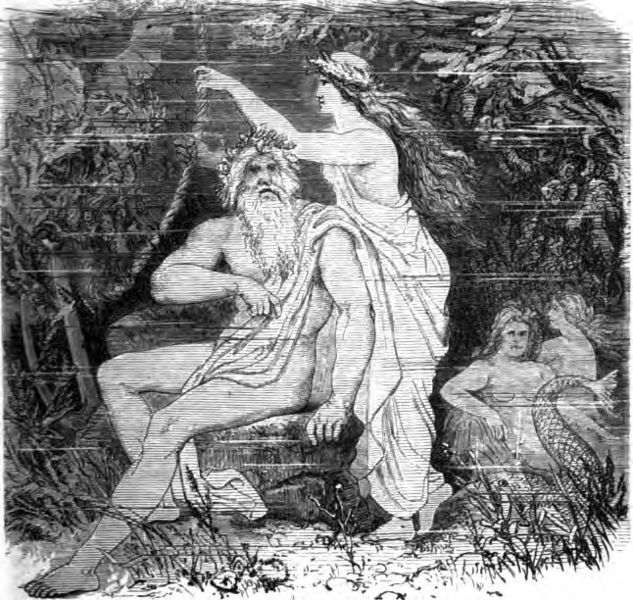 Ægir is king of the sea and is famous for his elaborate parties.   He’s also the god of brewing.   His hall is lit with bright gold where beer is constantly flowing.

While some  stories  portray him as a jötunn,  many do not. In some texts, he is referred to as something older than the jotun, and his origins are not really explained. He’s considered to be extremly old (he is the father of Tyr) and has nine daughters referred to as the billow maidens.

Bára (or Dröfn, wave)
Blóðughadda (the one with blood-red hair – the color of the waves after a naval battle)
Bylgja (to billow, or big wave)
Dúfa (the pitching wave)
Hefring (the surging wave)
Himinglæva (the wave that reflects the light of the sky)
Hrönn (the grasping wave)
Kólga (the chilling wave)
Unnr (or Uðr, wave)

each name reflecting a different characteristic of ocean waves. S

Ægir is a son of Fornjótr, a giant and a king of Finland, and brother of Logi (fire, flame) and Kári (wind). In Lokasenna, he hosts a party for the gods where he provides the ale brewed in an enormous pot or cauldron provided by Thor. The story of Thor getting the pot for the brewing is told in Hymiskviða. Ægir had two servants, Fimafeng (killed by Loki) and Eldir.

Aegir, God of the sea,

Father to the nine maidens,

Brother to both the flame and the wind,

We ask you to join us this day as we celebrate the blessings you have given us.

We ask you to joihn us this day as we celebrate with you.