The importance of Feast in Asatru 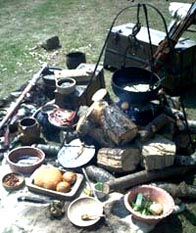 The Importance of the Feast in Asatru

Recently, a Pagan Wiki I do some writing for posted a web page about the importance of food in the pagan belief structure.  It’s interesting  because as I sat down and thought about it,  having a feast, or at least some point where we “break bread together” is almost always part of events that I run.  I’d originally thought that I’d been doing this out of convenience.  (I typically hold events weekday evenings at just after the dinner hour, so it made sense to put out food so people weren’t trying to figure out food and get to rituals.).  But as I thought about it further, I realized that it actually was “part of the process” which makes up our ritual time together.  In some ways its as important a part of our gatherings as the ritual itself.

So lets take a look at historically what feasting meant to those labeled as “Vikings” and a bit about some of the traditions surrounding feasting in the past.  To conclude, I’ll spend a little bit of time talking about how it fits within the belief structure.

We can turn to Sturlson’s Heimskringla, or the Chronicle of Kings as an excellent resource. As opposed to some of Sturlson’s other works, the Heimskringla has a lot of specific historical information in it.  It allows us to see more about the social interactions of people than we see in his other works.

Perhaps one of the most interesting sections of the Heimskringla is the declaration of King Hakon regarding Yule feasting.  Hakon decreed that feasting for Yule was to happen on the same day as the Christian Holiday (Christmas), and that every man was required to brew malt into ale.  Yule was to be kept “holy” as long as the Ale lasted.  This shifted the date of the Yule festival off of December 14th to a different day.

The change of this date of the Yule feast is an indication of something that has always been a truism within the Asatru belief structure.  Specific dates are rarely important.  Because of the pragmatic nature of the religion,  rarely do we find that ritual days are always tied to specific days of the calendar.  While Hakon declared the feast of Yule to be on a specific day, it was done so not for any spiritual purpose, it was done for praticality.   By moving the Yule feast from its previous date to the new one, The month effectively had one holiday where everyone celebrated, rather than two, where Christians celebrate one day, and “pagans” celebrate on another.

In addition, as we look at this change in dates we realize that the Yule feast may not entirely be about deity worship.  By combining the two festivals together we allow community, regardless of faith, to be built together as a unit.

This entry was posted in Articles. Bookmark the permalink.