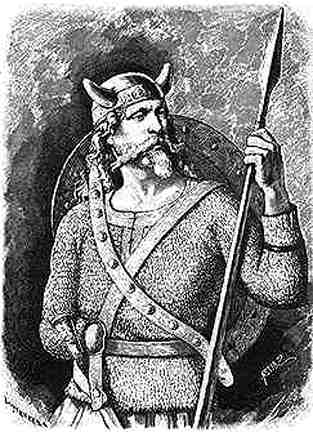 Tyr is the god of single combat, justice, and vows in Norse mythology, and is portrayed as a one-handed man. In the late Icelandic Eddas, he is portrayed, alternately, as the son of Odin (Prose Edda) or of Hymir (Poetic Edda).  Tyr is often called upon when dealing with vows, or with justice.

According to the Poetic Edda and Prose Edda, the gods decided to shackle the wolf Fenrisulfr (Fenrir), but the beast broke every chain they put upon him.

Eventually they had the dwarves make them a magical ribbon called Gleipnir from the noise a cat makes when it moves, the sinews of a bear, the breath of a fish, the spittle of a bird, the beard of a woman, and the roots of a mountain.

Fenrir sensed the gods’ deceit and refused to be bound with it unless one of them put his hand in the wolf’s mouth.

Tyr , known for his great honesty and courage, agreed, and the other gods bound the wolf. After Fenrir had been bound by the gods, he struggled to try and break the rope. When the gods saw that Fenrir was bound they all laughed, except Tyr, who had his right hand bitten off by the wolf. Fenrir will remain bound until the day of Ragnarök. As a result of this deed, Tyr is called the “Leavings of the Wolf”.

According to the Prose version of Ragnarok, Tyr is destined to kill and be killed by Garm, the guard dog of Hel.  However, in the two poetic versions of Ragnarok, he goes unmentioned; unless one believes that he is the “Mighty One”.

Tyr, God of the Morning, the horn call ends the night.

Sunna wheels high over Midgard, but higher still is your might.

The troops are raising banners to march in first dawn´s light: Tyr, also a warrior, give us strength for the fight.

Tyr, God of the Noontide, the heat makes hazy the land.

Our helmets scorch our foreheads, our boots are burned by the sand.

Though every step is painful, we will pursue our way;

Tyr, also a warrior, help us never to sway.

Tyr, God of the Sunset, the darker hours draw near.

Our people are safe from dangers as long as we keep them clear.

Before your sword and shield all shadows and foes disappear;

Tyr, also a warrior, teach us to master our fear.

Tyr, God of the Midnight, this battle will be our end.

We always followed the North Star, for justice made our stand.

If ever we were worthy for you to fight and fall,

Tyr, also a warrior, lead us on to your hall!

Taken from the Common Domain

Tyr keeps troth with the trust of the wolf,

With the oath of the Aesir. Angry the heath-dweller,

Bound by the bear, by the breath of the herring,

Grinds in a grimace, Gleipnir straining.

Loud is the laughter, light is the arm

Of the weakened warrior, fen-wolf’s leavings.